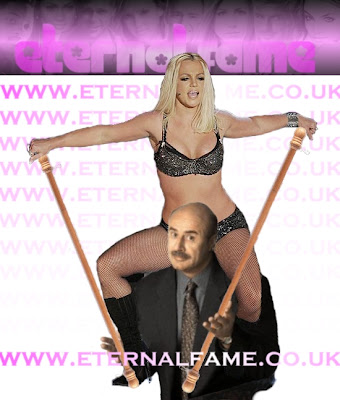 Was Dr Phil swooping into the hospital to be at Britney's bedside a selfless act, responding to the desperate plea from her parents?
Or was it the very loud golden opportunity knocking on Dr Phil McGraw's shiny head? RATINGS BOOST ALERT! RATINGS BOOST ALERT!

So was Dr Phil planning on supporting Britney Spears or was he hoping to be the ring master of this particular celebrity circus?
Shortly after hearing of his visit to the hospital I noticed that front and centre on his website it said "Britney Spears Exclusive!". This has since been replaced with something else.

Not long after that, Dr Phil announced that he was now scrapping the idea of a show all about Britney's health problems. He said on his site:

"Because the Spears situation is too intense at this time and out of consideration to the family, I have made the decision not to move forward with the taping".

But even though it was Britney's parents whom initially contacted Dr Phil for help, they have recently blasted Dr Phil for "violating their trust", as reported on Showbizspy.

But, maybe we've got it all wrong. What if Dr Phil is actually Britney's hero and an idol that she's so in awe of, that she is even attempting to emulate his look?
I give you the evidence. 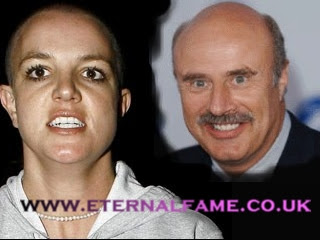 Britney Spears wants the Dr Phil look.
She just needs to don the business suit and fashion a stick-on moustache made from her "hair-down-there", that I'm sure she has saved (or shaved, haha) for precisely this authentic finishing touch.

But Britney's not the only member of the "Dr Phil McGraw look-a-like cult".
Check out the creator of the infamous Bum Fights DVD when he was invited to appear on Dr Phil's show.
Even though the guy obviously put in a lot of effort to look like his idol, his face to face meeting was a brief encounter.
He was ejected from the show because Dr Phil felt that the guy had 'exploited' the people he filmed on his DVD.
Well duh! Of course Phil, can't you see? He's trying to emulate YOU accurately.

If you are interested in Dr Phil you may want to check out his site HERE.
Or why not help Britney and become a decoy for the paparazzi by printing out, making and wearing a 'Bald Britney' mask from Weird Wonderful Web.
Posted by Weird Wonderful Web at 20:49