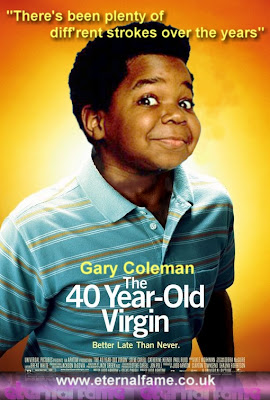 Diff'rent Strokes star Gary Coleman has revealed he is a REAL 40 year-old virgin, despite the fact he got married last August.

According to The Sun newspaper's report today.
The actor is quoted as saying:
"I don’t choose to be, I just am. I have love in my heart, I have the desire — I just don’t know what it is."

The 4ft 8in actor doesn't get much luck when it comes to acting jobs. He wasn't offered the starring role in 2005's 'The 40 Year-Old Virgin, but it seems he would have been the most qualified to play the role. 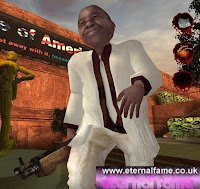 Poor Gary doesn't even get the chance to play himself!
Gary Coleman features in the infamous video game 'Postal 2 - Share The Pain'.

Gary gave his likeness and voice to the "Gary Coleman character" in the game, but when it came to making the film: 'Postal-The Movie', Verne Troyer (better know as Mini-Me from Austin Powers) plays the part that should be Gary.

According to director Uwe Boll, Gary didn't want to play a character in a movie that had to swear so much on screen.
Posted by Weird Wonderful Web at 14:32