Sawyer held captive, but not by 'Others' 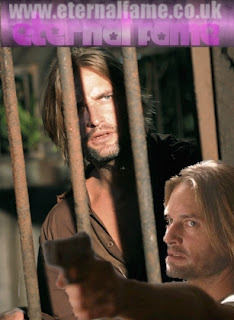 Yes LOST fans, it's back for the fourth series and BBC news has reported that, actor Josh Holloway, who plays the tough guy character 'Sawyer' in the hit TV series, was almost lost for real!

Not only does Sawyer get kidnapped and imprisoned by 'The Others' in the series, but the actor Josh Holloway and his wife were held hostage in real life at their house in Hawaii.

Ruben Royce, aged 23, broke into Holloway's home and threatened him and his wife at gunpoint back in October 2005, before stealing their wallets and their car.
The man also admitted three other robberies and last month was found guilty of a fifth. He was convicted of burglary, robbery, firearms violations and reckless endangerment.
He pleaded guilty to 34 offences as part of a deal, which means a sentence of 30 years in prison.

Prosecutor Maurice Arrisgado said:
"They thought they were going to get killed. This guy was very vicious and had no hesitation in pointing the gun in their face."
Posted by Weird Wonderful Web at 15:24