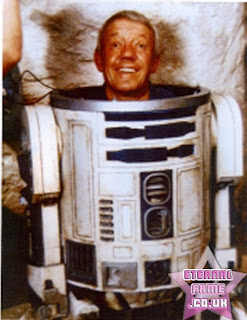 Kenny Baker, the actor that was inside R2D2 in all six Star Wars films, was taken ill on his way back from attending film conventions in Chicago.

74 year-old Kenny has a long-standing asthma condition. He suffered problems during his flight home to the UK. Once back in England, he was rushed to a private hospital in Manchester.

The 3ft 8in star is expected to be back at his home in Ashton-On Ribble in a few days.

For more info about Kenny Baker check out his official site.
Posted by Weird Wonderful Web at 23:50

Hey,The most recent hospital robots, named RP-VITA, originate from Roomba vacuum cleaner creator irobot and Intouch Health. Like R2-D2 in Star Wars, they can wander about on their own, guided by sensors and programming that maps areas to evade crashes. Specialists can likewise explore them around Icus and different offices.Thank you!!
>>>>>>>>>>>>>>>>>>>>>>
Majakel Medical