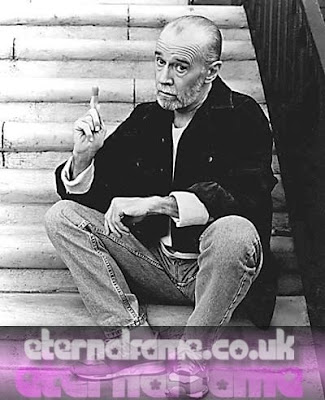 Never one to fear boundaries, he was famously arrested in Milwaukee in 1972 and charged with "disturbing the peace" for performing his infamous landmark routine "Seven Words You Can

Never Say on Television". In which he examined the seven most offensive words in the English language and with comedic skill, dissected their power to shock as an attempt to take away much of their sting.
Later in 1978 a New York radio station was charged for broadcasting Carlin's best-selling recording of "Seven Words".

George tried to explain that "there are no bad words, only bad intentions".
He was very interested in words and drawing a distinction between words and the intentions behind them. He told audiences:

"Don’t get hung up on language, Look instead for the real culprits — cruelty, coercion, abuse of power, prejudice, exploitation."

NY Daily News has a small piece about him in which they publish some of his more well known 'clean' jokes. Demonstrating that despite the decades his career spans his jokes always continue to be relevant, and most importantly, funny.

Check out this video of George Carlin on a 'buzzword' roller-coaster (try to keep up), and witness a fan of words and phrases steaming through a soundbite stampede.


Posted by Weird Wonderful Web at 11:24 No comments: Links to this post Troubled, 24-year-old singer Amy Winehouse is in the news again. This time relating to her ill health.
In an interview with BBC Radio 1, Amy's father, Mitch Winehouse explained that his daughter has been diagnosed with "traces" of the lung disease emphysema, after being rushed to hospital following a collapse at her home.

He explained "there is a small amount there which is completely repairable, as long as she gives up smoking".
He also warned her circle of drug taking friends and drug dealers to stay away. He said

"I'm saying to those drug dealers, and they know who they are, if they are supplying crack to Amy, then they've got to take responsibility".

"I don't want her hanging out with her mates like Pete Doherty either. What hope does she have if people are taking drugs around her?"

Posted by Weird Wonderful Web at 10:28 No comments: Links to this post

Britney Spears hounded and surrounded by paparazzi
Prosecuters in Los Angeles refused to persue the case of the paparazzo who pressed charges against Britney Spears, alleging she ran over his foot with her car.

According to Associated Press, Deputy District Attorney Joseph D. Shidler blamed the paparazzo himself for causing the injury. He wrote that the "only way the victim's foot could have been where the video indicates it to be was by the victim placing it in that location."

And just because it sort of ties in with the story, I've found this very lame game for you to try. HERE People once doubted the sincerity of Britney Spears' saviour and 'knight in shining Armani' Adnan Ghalib, simply because of his job.

Okay, so the fact that Britney's ex-lover Adnan is part of the paparazzi might set some alarm bells going. I know what you're thinking - aren't the paparazzi the enemy of celebs? Was Britney keeping her friends close but her enemies closer?

In fact the paparazzi and the celebs need each other, to varying degrees, more then the general public may realise. But that's beside the point.

Britney must have picked up on his inner kindness. She must have sensed that despite his job, he wasn't the type of guy to insinuate himself into a high profile celebs life, just to get the best dirt.

So it's only now that Adnan is Brit's ex that it suddenly occurred to him that, maybe, just maybe, there might be some worth in those personal and intimate pics and videos they took as a loving couple. Some might say it could even be career enhancing for a paparazzo to have access to such material!

Well, well. It couldn't have worked out better for Mr Ghalib if it had been (ehem) planned. Although, saying that, not all Mr Ghalib's 'plans' are working out.
I'm sure you were all shocked, dismayed and left in a state of disbelief, when you heard that Mr Ghalib was now allegedly trying to sell a Britney Spears sex tape. Sadly for Adnan, it's not going too well.
Despite what he says, he is having trouble getting 'value for money' for his exclusive tape. And to top it all off, according to MTV, Britney's fans are stepping up to defend her honour by issuing death threats to Mr Ghalib, he even alleges he was stabbed by one furious fan.
Posted by Weird Wonderful Web at 12:35 No comments: Links to this post