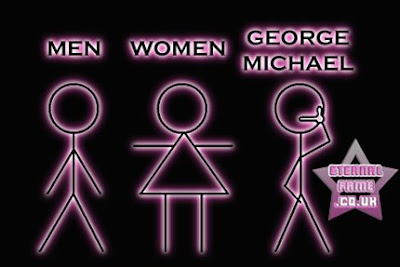 Crack smoking, flash friendly, George Michael toilet symbol added.
Yes George Michael arrested in toilets once again! Only this time he was after the other type of crack.

According to The Telegraph newspaper, George Michael was arrested for possession of marijuana and crack cocaine, in a north London underground toilet, after police were tipped off by a lavatory attendant.

"I want to apologise to my fans for screwing up again, and to promise them I'll sort myself out. And to say sorry to everybody else, just for boring them".

You would imagine that multi-millionaire pop stars would avoid public toilets like the plague. But no, not George. In fact he seems to use public conveniences like some sort of recreational convenience store.
A 'one-stop shop' where you can arrange a date, buy some condoms, buy some crack and shockingly, maybe even go to the toilet.

The first public toilet to start selling CDs, DVDs, milk and bread will definitely gain itself a life long customer.

For more see: Telegraph.co.uk
Posted by Weird Wonderful Web at 19:55