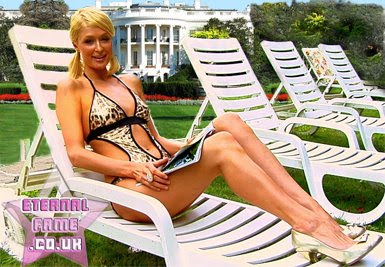 Paris Hilton at the Whitehouse - Paris for President
After John McCain decided to use footage of Paris Hilton and Britney Spears in a campaign video, comparing them to his rival Presidential candidate Barack Obama, with the statement:

"He's the biggest celebrity in the world...
...but is he ready to lead?"
Paris herself (along with the guys at FunnyOrDie.com) have produced a response video.

See McCain's original here on YouTube
Posted by Weird Wonderful Web at 14:50 No comments: Links to this post 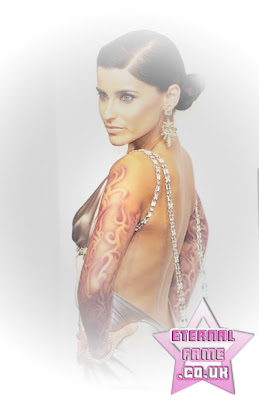 Canadian singer Nelly Furtado revealed to Entertainment Tonight Canada that she secretly got married over the summer.

On July 19th Nelly wed Demacio Castellon, a sound engineer whom she worked with on her 2006 album 'Loose'.

The singer has said
"I just feel kind of free and relaxed and more in tune with trying not to be so stressed out, I'm happy ... I'm excited about the future."

See story AFP
Posted by Weird Wonderful Web at 00:34 No comments: Links to this post

Instead of signing some super lucrative, celebrity magazine deal for her first baby pics, actress/singer/songwriter Minnie Driver decided to publish her first picture of her baby son on her MySpace page.

Minnie, 38, posted the picture of herself and her son Henry Story Driver just one month old on the popular networking site.

Also on her profile are several songs that she wrote/performed for you to listen to, and a video of her performing a live acoustic song with The Who's Pete Townsend.

See Minnie Driver's MySpace page for larger image.
Posted by Weird Wonderful Web at 16:52 No comments: Links to this post