The date for Michael Jackson's burial has been pushed on to 3 September 2009 and no longer the date of what would have been his 51st birthday.

Previously it was revealed that Michael Jackson was to be buried at Forest Lawn Memorial park in Glendale on his birthday, 29 August 2009.
Ken Sunshine, a spokesman for the Jackson family, did not give a reason for the delay.

More at source: BBC entertainment news.
Posted by Weird Wonderful Web at 11:31 No comments: Links to this post

Jackson to be buried on 51st birthday. 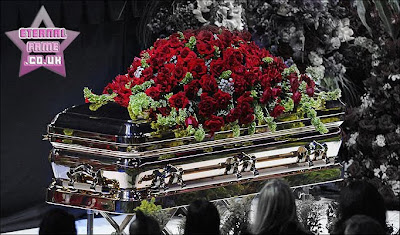 Michael Jackson to be buried on his 51st birthday August 29th
Michael Jackson's father, Joe Jackson has confirmed the date and burial place of his pop star son Michael.

AFP reports that Michael is to be buried at Los Angeles' Forest Lawn Cemetery, on what would have been his 51st birthday, 29 August 2009 at approximately 10am, quelling the rumours that there was to be a Neverland burial and shrine similar to Elvis Presley's Graceland.

Read full story at source: AFP
Posted by Weird Wonderful Web at 14:25 No comments: Links to this post