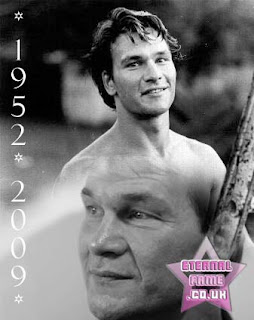 Hollywood star Patrick Swazye has died aged 57.
In January last year he was diagnosed as having advanced stage four pancreatic cancer. He had been battling the disease for almost 2 years when he died. He chose to make his battle public because of premature rumours of his death circulating for quite some time.

A statement by Annett Wolf quoted by the Associated Press said "Patrick Swayze passed away peacefully today with family at his side after facing the challenges of his illness for the last 20 months."

The Times online published a tribute entitled "Women loved Patrick Swayze, and men wanted to be him."

The UK Press Association (UKPA) has reported the "red carpet tributes" as many actors at Toronto's International Film Festival had the news broken to them by reporters literally on the red carpet.

Patrick Swayze was best known for his roles in 1990's Ghost and 1987's Dirty Dancing.
Posted by Weird Wonderful Web at 09:27